One of our Plymouth team members, Chris Vincent is a big fan of moths – so much so that he’s set up a moth trap at our Plymouth garden centre to monitor sightings.

Working with our Plymouth Branch Manager Duncan, Chris sets up a moth trap in the evening and checks it at 6.45am the next morning. His moth trap consists of a UV light trap which runs overnight. The trap is filled with egg trays, giving the moths somewhere safe to rest. After the number and quantity of species is recorded, he releases the moths unharmed.

Chris sends his records to the county recorder where they are analysed and added to the national database. This enables moth species and populations to be monitored and helps inform any necessary conservation measures.

There are approximately 2,500 species of moths in Britain, although the smaller micro moths have not been studied as well as the larger moths. In 2020, an atlas of Britain’s larger moths was produced, which shows that there has been a long term decline in the distribution and number of around half of the 800+ species of larger moths.

The knock-on from this is that there are less caterpillars, a vital food source for other wildlife and particularly birds during the breeding season. Moths are also important pollinators of flowers and crops so their dwindling numbers have a huge effect on general biodiversity. This could even impact on our own survival.

Chris says this is why he’s a big fan of the use of eco-friendly products over chemical containing weedkillers and pesticides. “The natural health of our gardens, the environment and indeed our own wellbeing are far more important than spraying a chemical to kill a few aphids.”

So far he has had some very interesting results. During the first few days he found an ‘Old Lady’ moth, a species that only rarely comes to light traps, and another called ‘Rosy Underwing’ which has an impressive wingspan of 70mm.

“When I contacted the county recorder for moths, he informed me that this was the first record of ‘Rosy Underwing’ in Devon! There have only been around 20 records in the UK, the moth originating from central and eastern Europe. To get a first for Devon is incredibly lucky.”

Chris’s luck continued with a ‘Maize Wainscot’ moth, only the second recording of this species in the UK. The first was in 2011 on the Isles of Scilly – so it is the first mainland UK record. This species originates from southern Europe and Africa and is smaller with a wingspan of around 40mm.

Chris is a big fan of wildlife and started recording moths as a hobby in 2018. He became interested in recording the moths at work after noticing that a small security light outside one of the stores at Otter attracted moths.

Over the course of this year he has recorded over 200 species. We look forward to hearing more about the moths and finding out if Chris has any more firsts for our Plymouth garden centre!

Rosy Underwing (with Old Lady in the 1st image) 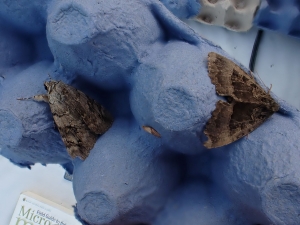 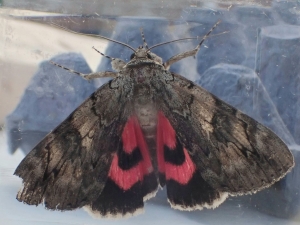 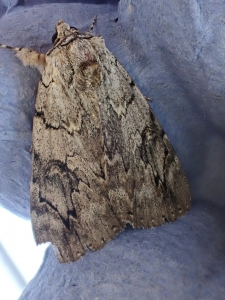 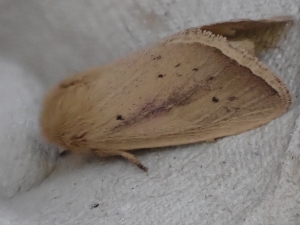